This method is minimally invasive and involves localized dissection around the hernia defect only. Dr LP Cheah has performed over 2000 such hernia repairs.

The technique is straightforward but few hernia surgeons can do this in Melbourne using a short incision.  This can be done under local anaesthesia too with general anaesthesia.

The repair is done TENSION-FREE - the mesh is secured with staples/sutures/Absorbatack/micro-grips on the mesh itself(Progrip) to the muscles in a way which does not pull on the muscle(If the mesh is sutured too tightly onto the muscles under tension, there may be pain on coughing/straining)  This repair is based on the Lichenstein technique - but the slit in the mesh is cut vertically instead of longitudinally.

Short incision length - A cut is made over the inguinal canal - the length of the cut depends on the thickness of the body fat. In a lean person, it is usually 3-4cm in Dr LP Cheah's hands. (This is nearly the same length as the sum of the length of 3 incisions needed in a laparoscopic repair. However a lot of surgeons who do hernia repairs are not able to so via a short open incision and the patients end up with a long scar - hence the current trend away from open inguinal hernia repairs)

Occasionally a mesh plug may be used to as well to patch the "hole" in the abdominal wall where the hernia is popping out from. 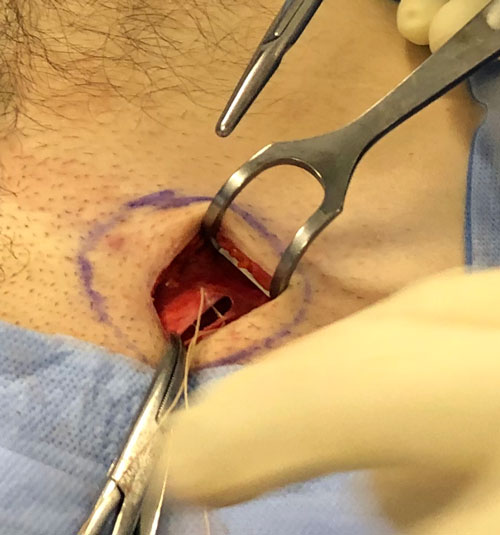 Benefits of having a Hernia Repair

Planned elective surgery is much safer than leaving a hernia until a complication happen.

Risks of not having surgery:

1. Hernia may get bigger - as it gets bigger, there is more likelihood that the intestine will come out in the hernia as well.

2. Risks of contents of the hernia becoming trapped and blocked or gangrenous(if there is bowel in it, the bowel wall may die and burst causing life-threatening peritonitis). Treatment of the latter would mean a more extensive bowel resection and a weaker repair especially if a mesh is contraindicated in the presence of infection

This should be discussed with your surgeon and anaesthetist before your operation.

Benefits of local anaesthesia and sedation: 1. For patients with serious heart or lung problems, there is a significantly lower anaesthetic risk having a repair under LA and sedation. 2. Patient is awake throughout the procedure - some patients are afraid of being put under a general anaesthesia. 3. Quicker recovery as the patient is given a lower dose of the anaesthetic drugs when compared to a general anaesthesia(although this benefit is minimal in someone who is fit and well - ie a matter of minutes)

Benefits of general anaesthesia - some patients prefer to be asleep for the procedure(Local anaethesia will also be injected during the operation). NO muscle relaxants(for paralysis) needed - unlike in a laparoscopic repair.

The anaesthetist will insert a drip for administration of drugs and fluids. The site of the surgery is marked before the operation and the site shaved.

A short incision is made over the hernia. The hernia sac is freed from the surrounding tissues and its contents are inspected and pushed back in or the fat may be resected .

A polypropelene mesh is cut into a special shape and secured.  (the mesh used will be tailored to the hernia - usually a Prolene mesh or Progrip mesh)

Sometimes a mesh plug would be used(Bard Perfix Plug). The mesh provides additional strength to the repair. The mesh (which is permanent and non-absorbable) allows scar tissue to grow within its holes hence increasing the strength of the abdominal wall it is covering.

Average operating time is around 30 minutes.

If there is a femoral hernia - this will be repaired as well at the same time. Usually with a rolled up mesh plug.

You are encouraged to move you legs and flex and extend your ankles as soon as you can once in the recovery ward. Once fully alert, you can eat and drink.

Pain-killers - It is recommended that Paracetamol be taken regularly for the first few days together with a non-steroidal anti-inflammatory medications(eg Brufen) (Provided there are no contraindications to the latter eg peptic ulcer disease, severe asthma).  A few patients may need additional pain killes like Endone or Tramadol.

Bowel motions - It is important to drink plenty of fluids and take lots of fibre(fruits and vegetables) after the operation to avoid constipation. Movicol can also be taken if constipated.

Dressings - Dissolving sutures is usually used on the wound. Adhesive white strips(Steristrips) are placed across the wound for additional closure strength. A waterproof dressing is usually placed over the top of the wound(Tegaderm/Opsite). This should be left in place for around 2 weeks. The adhesive strips under (Steristrips) can be removed another week later.

RECOVERY - You are encouraged to walk and do light activities as soon as you get home. Take care when you get out of bed(avoid straining). It is advisable not to do any heavy lifting for 4-6 weeks.

BACK TO WORK - this varies from person to person. For office work - about 1-2 weeks. For manual work - it slightly longer. (The author has had self-employed patients return to work lifting 10kg boxes from the 3rd day without any problems with the repair)

DRIVING - it is best to not drive for until one is comfortable(the risk is of pain in the wound when braking), please check with your car insurance company too.

One reason some surgeons recommend laparoscopic surgery is that there is supposedly less pain in the immediate post-op period. However in the Dr LP Cheah's  hands, pain post-op is similar or less via mini-open inguinal hernia repair(also there is no shoulder tip pain or pain in the belly button region often seen in a laparoscopic repair) Also a lot of surgeons do not get enough training in doing open inguinal hernia repairs through a short incisions and hence are not able to do them well.

On the downside, a general anaesthesia with MUSCLE RELAXANTS is needed for a laparoscopic inguinal hernia repair. In addition the special instruments and equipment needed for the laparoscopic repair is costly(about an additional $1000-$1500)

Risks specific to laparoscopic surgery include:

(i) Injury to organs near the hernia site such as the intestine and bladder
(ii) Massive haemorrhage from injury to major blood vessels
(iii) Gas embolism - from the carbon dioxide gas used to insufflate; this can be life threatening
(iv) Swelling of scrotum due to seroma - may need decompression postop
(v) New hernia - at any of the laparoscopic port sites(usually 3 keyhole sized cuts are made)
(vi) Adhesions causing bowel obstruction
(vii) Subcutaneous emphysema - gas tracking in soft tissue causing swelling under skin from chest to scrotum
(viii) Injury to nerves from pigtail metal staples used to tack mesh down - causing postop pain
Studies have also shown a HIGHER RISK OF HERNIA RECURRENCE from a laparoscopic repair compared with an open mesh repair(N Engl J Med 2004; 350:1819-1827).
The is also a potentially higher risk of blood clots developing from the combination of the laparoscopic technique and general anaesthesia. (The author has also noticed an increase in port site hernias from the laparoscopic port sites especially in the umbilical area)
However, if one wishes to consider laparoscopic repair, Dr LP Cheah is happy to discuss this as well(his preference would usually be TAPP technique). His main concern is the deep placement of a large piece of non-absorbable mesh in the long term(There are lots of litigation cases regarding such use of meshes especially in America). Removing a permanent mesh will be very difficult and dangerous(may be stuck to femoral/iliac arteries & veins) - this might entail a long robotic procedure to remove the mesh & repair tears in the vein/artery.

2. REPAIR WITHOUT MESH - there is more tension on the muscle and more postop pain. This is only highly recommended in paediatric hernias and in the presence of infection where a mesh is contraindicated.

Desarda repair - This is a technique Dr Cheah has learnt recently. It is a good alternative in lean patients without any tearing of their external oblique aponeurosis with small hernias who want a repair without mesh. It involves cutting out a short width of the external oblique aponeurosis and suturing it down to the inguinal ligament going laterally to narrow the deep ring.

Shouldice repair - Dr Cheah is familiar with this technique as well. This is a 4 layered repair. Needs longer incision and is more painful postop than his mesh repair.

3. OBSERVATION alone - if the hernia does not cause any symptom, the risk of complication is around 0.2% each year in a man. Certainly if the hernia is seen only on ultrasound and there is no lump - surgery is not neccessary. Also in cases of groin pain alone with hernia seen only on ultrasound - surgery is unlikely to relieve the groin pain(this is usually due to musculo-skeletal causes)

1. Urinary retention - usually a temporary problem and more common in elderly men who have enlarged prostate. May need a temporary urinary catheter. There risks is low if local anaesthesia has been effectively injected

(iii) Scar/keloid - the scar may thicken and be prominent

3. Damage to bowel/bladder and blood vessels(rare - more so in a laparoscopic repair where one can get serious life threatening vessel injury). Development of adhesions in the bowel that is pushed back in.

5. Unexpected findings - eg bowel cancer in the hernia - this may mean having a bigger operation than planned

6. Ongoing pain and discomfort - sometimes this is due to a nerve in the groin being cut or trapped in a stitch/staple or caught in scar tissue.

General risks of any operation

There are risks with any operation which may also happen with a hernia repair.

1. Deep venous thrombosis (Blood clots in the deep veins of the leg) with risk of pulmonary embolism (clot may break off and go to the lung - this can be life-threatening). The risks are less if local anaesthesia is used instead of general anaesthesia and if the operating time is shorter.

Also in general, smokers and obese patients have increased risk of developing complications. Risks will be reduced if you stop smoking at least 1 month before the surgery and your BMI is less than 30.

Mr LP Cheah is an expert in inguinal hernia repairs. He has learned his techniques from a number of teachers from Britain, Australia, Canada, Germany and India including A/Prof Maurice Brygel (Melbourne Hernia Clinic; he has performed over 10,000 hernia repairs until he retired hence earning his reputation as the Hernia King!) and Mr David Fossard (England). He is one of the busiest hernia surgeons in Melbourne & Victoria using the  mini-open technique and has performed over 2500 hernia repairs. His philosophy to hernia repairs is that the technique used must be suitable for the particular type of inguinal hernia and the symptoms the patient is getting. 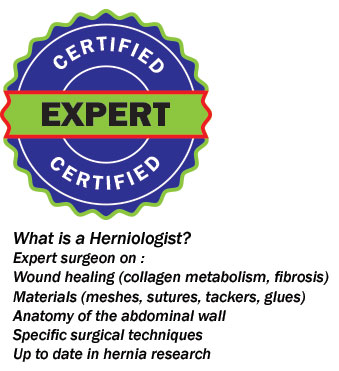